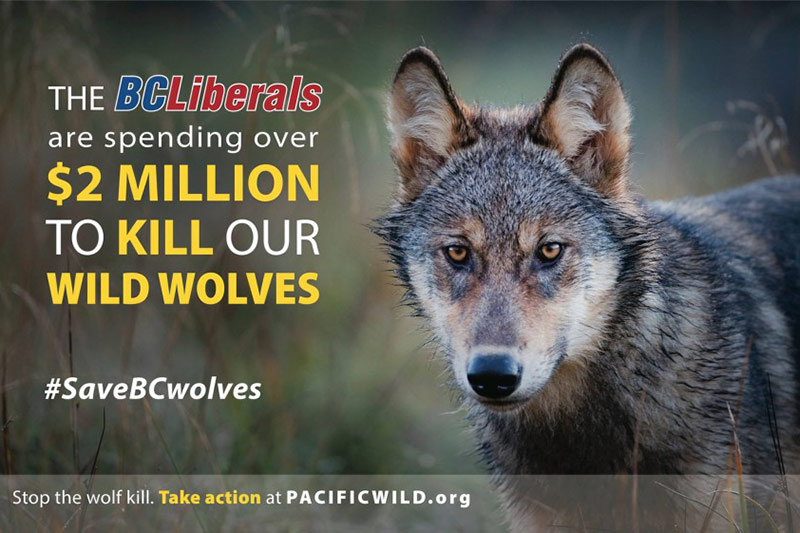 While the Province doles out tax dollars to kill wolves and pen caribou, logging continues to destroy the caribou’s habitat, putting many other species at risk

Ten environmental groups, representing thousands of British Columbians, have sent a letter to Premier Christy Clark, objecting to the fact that her government is spending hundreds of thousands of dollars to kill wolves and pen pregnant mountain caribou, while forests critical to the survival of the caribou, and many other species, continue to be destroyed or fragmented by industry.

The letter states that BC’s 2007 Mountain Caribou Recovery Plan is failing dismally. Instead of halting the decline of endangered caribou, after seven years of recovery efforts, the Interior Wetbelt had lost 500 mountain caribou by 2014. Habitat protection under the recovery plan was weak, but that is not being corrected. Instead predator control, maternity penning and translocations are receiving the mass of the focus and funds.

The letter urges the Premier to increase habitat protection by creating new and expanded parks, as well as by strengthening conservation measures outside of parks. The groups recommend three major new parks in BC’s Interior Wetbelt: the Selkirk Mountain Caribou Park Proposal, the Quesnel Lake Wilderness Area, and the Walker Wilderness in the Robson Valley. Significant parts of these proposed parks have already been withdrawn from logging to protect mountain caribou or old-growth forest, but these partially protected zones are too small, and they are not permanent. Their protection could be removed and some of them logged if the caribou fail to thrive.

The letter states: “BC’s Conservation Data Centre lists 40 species at risk in the humid, confer forests of the Interior Wetbelt caribou, and this figure does not count the species of the wetlands, rivers and other niches within these forests. Further, there are hundreds of species of lichens in the forests that have never been assessed or known to grow there until recently. Maternity penning and wolf culls do nothing to save these species. It is now time to ask how we can stop the decimation of all the species in BC’s high-biodiversity Inland Temperate Rainforest and Boreal forest.”

The letter concludes that “Without increased and permanent protection in the form of parks, we believe there is a real possibility that the public will end up with nothing to show for all the years and hundreds of thousands of tax dollars the BC government has already spent, and will continue to spend, on experimental techniques that have so far failed. BC could be left with no caribou, and if that happens, the caribou conservation zones could revert to logging, with no new parks of substantial size to help keep other species from extinction. Meanwhile potentially thousands of wolves might be brutally slaughtered during the Province’s five-year wolf cull experiment, doing severe damage to ecosystems.”