Saving Wolves With Compassionate Conservation: The Killing Must Stop 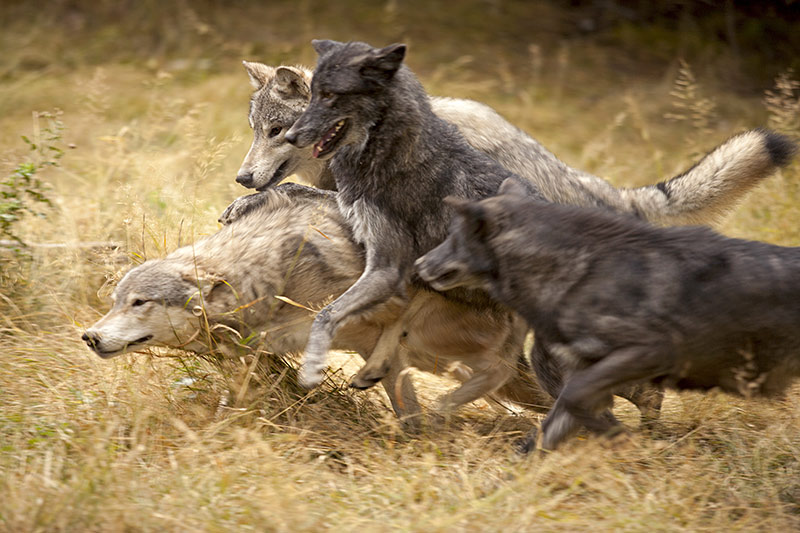 North Americans are often quick to condemn the brutality of other cultures and countries, inserting ourselves, sometimes using violent force, to establish what we consider peace keeping and a “good life”. Why then, has this sense of empathy not reached the way that we treat and care for other magnificent and fascinating species with whom we share the North American landscape?

Wolves have been resurrected in Canada as the classic scapegoat. As the human population continues to expand around and within what have become islands of wilderness, we condemn wolves for being who they are; one of nature’s most awesome and important beings. In our lust for control, we continue to condone killing wolves on a massive scale. In Beautiful British Columbia, more wolves are being slaughtered – read murdered — for “recreation” in recent years due to government championing of the so-called sport than since record keeping began. Alberta hosts numerous wolf-killing bounty programs, both publicly and privately funded, where people are financially rewarded for bloodlust. Both of these provinces condone contests where wild canids are rampantly killed and dead bodies stock-piled. Yet, the motivations to kill wolves are ethically bereft and ecologically unsound.

Nonhuman animals (animals), having evolved over millennia to suit their environment, can be viewed as other Nations. In North America, we have largely accepted this status for highly intelligent and social animals on other continents. Primates, dolphins, lions and elephants are often regarded as worthy of preservation and more. We shame poachers and other purveyors of grisly wildlife deaths because we feel the individual’s and family’s pain on a personal level. Are we only willing to take this position with animals who live elsewhere?

Annually, the third week of October represents Wolf Awareness Week. Canada’s wolf population is considered stable, yet most provinces do not support areas where these animals can thrive without being gruesomely slaughtered. What most of us are not aware of is that many conservation organizations and esteemed scientists consider western Canada to be at war with wolves. Wolves are being killed for “sport” through hunting and trapping over livestock concerns, under the pretense of saving doomed caribou herds, and on transportation routes across the majority of the provinces. Wolf family members are rarely safe from the myriad ways they can be butchered in a human-dominated landscape – many provincial parks allow sport hunting and National Parks are too small to protect multiple wolf families. And, there often is a good deal of collateral damage when individuals of other species are unintentionally killed. Although wolves require an adequate prey base, the defining factor for maintaining sustainable populations of wolves is protection from humans. 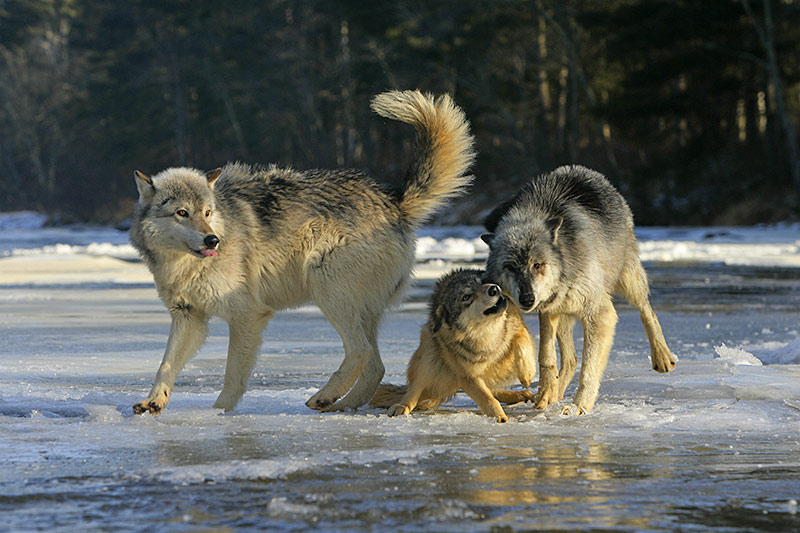 Dr. Gordon Haber, a biologist who studied wolves for over four decades, was burdened with the knowledge of the emotional ties, lifelong bonds, and the importance of family to wolves. He dedicated his life to learning about and sharing his knowledge that wolves deserve more than minimum viable populations, that safeguards are required to protect various wolf cultures and traditions, and that the experiences learned and passed through generations could be lost by disrupting the social structure of wolf families. This knowledge was a “burden” because of the continuous pressure from Alaska’s Board of Game to allow hunters and trappers to kill wolves from Denali National Park and Preserve just beyond park boundaries, decimating the wolf families who taught him how very much wolves were like people.

Much of Dr. Haber’s knowledge, well documented in his notes and gained through decades of direct observations while living in the wilderness alongside wolves, continues to be validated today by other wolf biologists. Simply put, what happens to an individual wolf happens to the family pack. Wolves celebrate together and mourn together. The social structure and emotional lives of wolves must be recognized and applied in conservation plans and our treatment of these highly evolved beings; individuals who should not be wantonly slaughtered when it serves our, not their, best interests.

Compassionate conservation, a rapidly growing international field, stresses that we should “First do no harm” and that individuals matter. Emotional capacities and personalities vary among individual wolves and other animals, as with humans. Some wolves are leaders, some followers. Some are bold, others timid and shy. Each individual contributes something different to the family to which they belong.

As humans, we accept that dogs are emotional beings, and we know that dogs evolved from wolves. Indeed, humans go to great lengths to promote not only the humane treatment of companion animals, but to provide such a high quality of life that it often rivals or surpasses our own. Unfortunately, in most cases we have failed to extend these ethical priorities to wildlife, especially when it comes to wild canids, who are still treated as “pests” to be removed. Wolf management across Canada implicitly sanctions harm to individuals, which extends to entire families of wolves. And, we know that killing wolves can have serious ecological repercussions.

As our population and utilitarian footprint continue to explode across the globe, we need a paradigmatic shift in consciousness that changes our role from one of dominance and superiority to one of tolerance and peaceful coexistence. We need to expand our compassion footprint, which should drive our humane treatment of wolves and other animals. This will require allowing for individuals of different species to be who they are, not just what we want them to be. They are not our slaves. 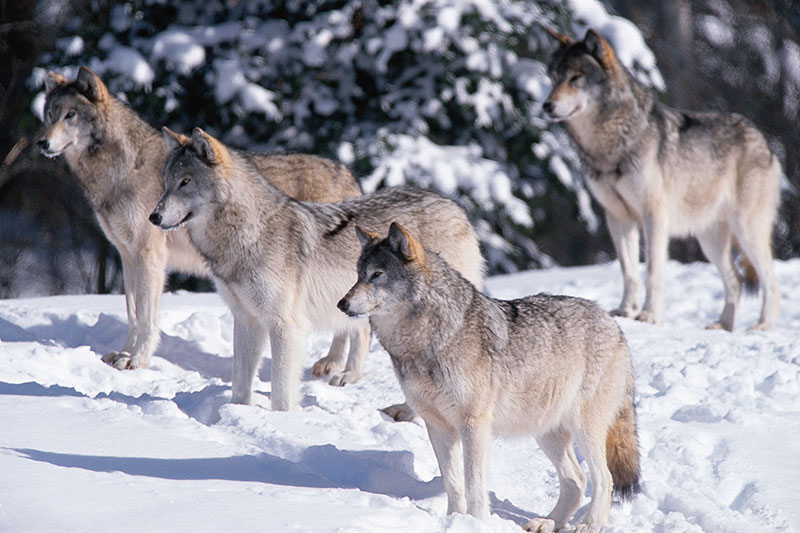 The extremely important ecological role of wolves as an apex predator, influencing the numbers and behaviour of many other species and ecosystem processes, must be honoured. Like human babies, young wolves experience prolonged dependency on their parents, siblings and elders, often spending about one quarter of their lives being taught essential skills and lessons. The rearing of young is a shared responsibility, as are cooperative hunting and feeding, protection of territory, and defense of the entire family.

For these reasons, trophy hunting, trapping, aerial gunning, use of poisons, and bounties have grave consequences for wolves who survive these killing sprees. The ripple effects of losing one or more wolves cascade through the family, either wiping out entire packs as they hang around in concern for the injured or return to a site to mourn a loss. Those individuals that survive to make new wolf families must do so without access to the knowledge and culture held by their slain family members, something that takes generations to build. They become refugees on their own land.

Lax hunting and trapping regulations reflected in current policies are irresponsible and cruel in light of this. But there is an even darker truth. In North America we manipulate our knowledge of wolf social behaviour for cold-hearted killing when we radio-collar individuals, referred to as “Judas wolves”, so that when they rejoin their family every member can be killed. The Judas wolf is left alive until the entire blood line is annihilated – an unimaginable punishment for one who unknowingly betrays his or her entire family.

Canadian provincial governments accept, promote, and participate in mass killings of wolves. In some areas, such as BC’s South Selkirk and South Peace regions, as well as the area around central Alberta’s Little Smokey caribou herd, severe reduction programs – experimental killing campaigns — are occurring under the guise of caribou conservation while critical caribou habitat continues to be compromised for human industry and recreational uses. History has shown that wolves are a resilient species, capable of returning to landscapes where they have previously been eradicated, but this does not excuse the butchery or intense and enduring suffering for which we are responsible. What it does is condemn the newcomers and survivors to ongoing slaughter even if the root of the problem, our unbridled resource extraction and recreation, were halted now.

Habitat loss and fragmentation, combined with direct human persecution, put Canadian wolves in a position where positive conservation efforts are critical. Without protected areas large enough to safeguard multiple wolf families, wolves face a trajectory of reduced gene flow and inbreeding. Provincial governments consider wolf killing a means of acceptable recreation in most provincial parks in Canada and public lands permit killing wolves to appease ranchers. Private landowners can also kill wolves and government agencies continue plans for large-scale slaughter where wolves overlap with endangered species, regardless of the fact that our own species has pushed struggling populations such as caribou to their brink.

Canadians are often considered “peace-keepers”, yet within their own borders they fail to recognize the nation of wolves, struggling to get by in a changing world that devalues them. We must rewild our hearts as we move on. We become what we teach and future generations must not be left to inherit the messes we leave behind.