Spring in the Great Bear Rainforest 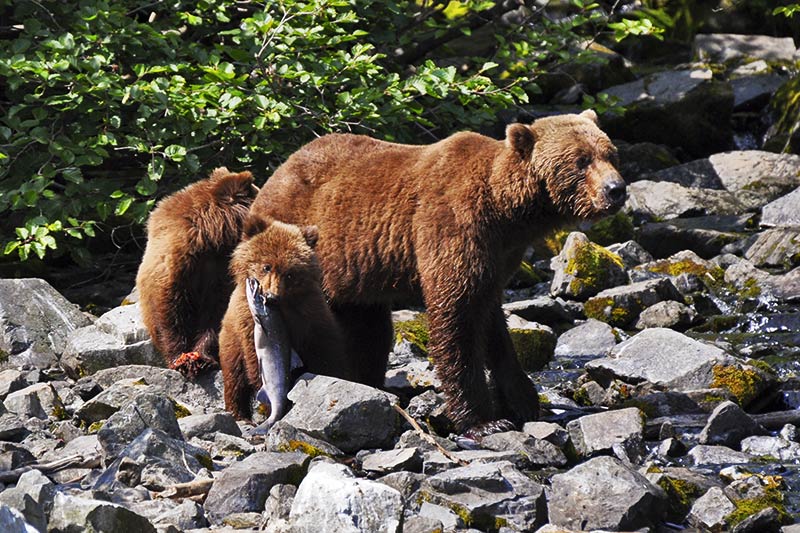 The Raincoast bear research crew gets ready for another field season.

Spring is a special time for the research crews at Raincoast. Across the lands and waters of the Great Bear Rainforest, bears are emerging from dens, returning to familiar landscapes with eyes squinting against the bright light of a new season. Soon, Raincoasters too will return to these landscapes, many with eyes squinting after a winter in labs and staring at computer screens. In the meantime, we’re quickly finishing analyses, prepping field supplies, readying boats and field gear, and counting down the days until our field work begins.

This spring will mark the 10th year of bear research for the Central Coast Bear Working Group. William Housty and Coastwatch began monitoring bear populations in the Koeye Watershed in 2006. Raincoast expanded the research in partnership with the Heiltsuk Nation in 2009, the Kitasoo-Xai’xais Nation in 2012, the Wuikinuxv Nation in 2013, and the Nuxalk Nation whose research came into full swing in 2014. Throughout these territories, hundreds of non-invasive hair snagging stations have gently collected hairs from almost 500 individual black bears and 150 individual grizzly bears.

Unfortunately, there are others also getting ready to re-emerge on this landscape, similarly searching for bears, but with very different motives. Despite a tribal law forbidding trophy hunting in this entire region, despite scientific research conducted by ourselves and our colleagues that reveals considerable risks with current management, and despite considerable public opposition, April 1st marked the re-opening of the government-sanctioned trophy hunt.

In the estuaries from which we conduct our non-invasive research, hunters will target the very bears we have tracked through generations. Bears we have observed since they were cubs have themselves had cubs who might soon be at the wrong end of a high-powered rifle.

The grizzly hunt in this area is managed from Victoria using models – population estimates which are, at best, guesses, based on factors such as the amount of precipitation, temperature, and tree species in the area. This hunt is managed with so little data it can only be described as managing blind. Not a boot from the BC Ministry of Environment sets foot in this area to check on the populations being hunted. Using these methods, bears could experience severe declines without detection.

By contrast, our boots can be found in every corner of these territories, covering an area two-thirds the size of Vancouver Island. This extensive research keeps our and the Heiltsuk, Kitasoo-Xai’xais, Wuikinuxv, and Nuxalk Nations’ collective thumbs firmly on the pulse of local bear populations.

Our work entails cutting-edge research that examines bear populations, stress ecology, range shifts, and responses to salmon abundance. But our work goes beyond scientific journals; importantly, it provides information to First Nations who steward these lands. This information includes how many bears, where and when bears move, how their occupation of the landscapes changes over seasons and years, and how their ecology is tied to the broader ecology of this salmon forest.

This spring brings many unknowns. Colleagues in Bella Bella have warned that the scarcity of snow on the mountains this year is something that hasn’t been seen in 70 plus years. How will this affect salmon that depend on glacial-fed rivers? Or the wildlife that depend on salmon? How hunting is affecting bears is unknown. How long-term changes in salmon abundances will affect populations of bears is unknown.

What is known is that in a few weeks we’ll return to watersheds across the coast, pursuing answers to some of these questions, doing what Raincoast does best – providing the science needed to help navigate an increasingly uncertain future and the ethics to guide our interactions with the wildlife with which we share this coast.